You are here: Home / Archives for perry 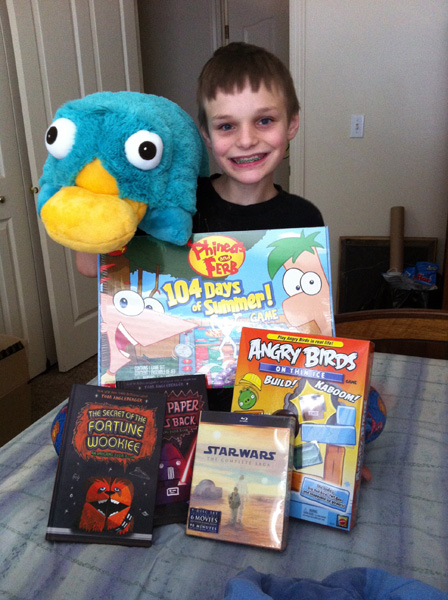 My JJ turned 11 on January 26, 2013. I don't know what happened to my little boy, but he is now just a young man. JJ is all about Phineas and Ferb, specifically Perry the Platypus, Angry Birds, and Star Wars, so that's what his birthday was all about. We had originally planned on visiting Grandpa and Grandma Smith for his birthday, but a nice big storm made its way through Utah and so we opted to stay home.  We spent a casual day at home. We were awakened by a very excited JJ. All he could think about was opening his presents, so we decided to just let him do it, even though it was early. He received: A Perry Pillow Pet, a Phineas and Ferb Game, an Angry Birds game, the complete Star Wars Movies on Blu-Ray, and 2 Star Wars Books. He was THRILLED and he pretty much hasn't put down his ... END_OF_DOCUMENT_TOKEN_TO_BE_REPLACED 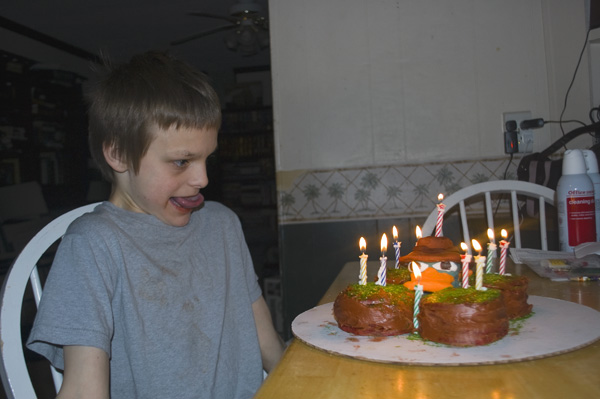 JJ turned 10 on January 26th. I can't believe my little boy is 10 already. He has gone through a lot in is young life as we struggled with his developmental delays and the eventual diagnosis of Autism. But I'm so proud of him for all he has accomplished and the person he is becoming. I wanted to share 10 things about who JJ is at this time in his life: 1. He is so excited about everything. He always seems to have a inner delight about even the little things in life. 2. He has an amazing memory and can remember even the littlest things about life or things people say, even if you don't think he is listening or noticing what is going on around him, HE IS. 3. He loves video games. Getting a DS for his birthday was a huge event in his life. The first thing he talks or asks about ... END_OF_DOCUMENT_TOKEN_TO_BE_REPLACED

I'm a wife, a mom, a blogger, a lover of crafting, and a graphic designer. I believe in living life to the fullest, sharing your heart and talents to enrich the lives of others, and then telling your story to leave as a legacy for those that come after you.

This week’s recipe  |  CHICKEY PASTA A delicious pasta dish that is light and yummy! The chicken pieces are heaven – in fact, you could just make the chicken and use as homemade chicken nuggets! Chickey Pasta Save Recipe Print Recipe My Recipes My Lists My Calendar Ingredients2 lb boneless skinless chicken breast, cut into END_OF_DOCUMENT_TOKEN_TO_BE_REPLACED

I am DeDe Smith of DesignZ by DeDe and I’m the proud creator of the TearZ, ScatterZ, and many more collections! I am a Digital Scrapbook Designer. I specialize on creating digital kits that help customers scrapbook the special moments in their lives. I hope that you can use my products to share your story END_OF_DOCUMENT_TOKEN_TO_BE_REPLACED

I am so thankful that I started writing some of my memories down about this trip on the blog, because I think there is a lot I could have missed! I’m so thankful to not forget these stories! I didn’t write everything down, so from now on this album might not be as detailed, but END_OF_DOCUMENT_TOKEN_TO_BE_REPLACED