You are here: Home / Archives for comfort

This week’s Recipe | Chicken Cordon Bleu Casserole by DeDe Smith
I love Chicken Cordon Bleu. It’s the perfect comfort food for me.  But I’ve never been great at making it – it just takes a long time and I’m not that great at breading things.  So this is perfect, because you get that same great taste, but it is so quick to put together! Serve it with some mixed veggies and maybe even some rice pilaf and you have the perfect meal!

Chicken, Ham, and Swiss – what more could you ask for!

This is the perfect comfort food! Chicken, Ham, and Swiss - what more could you ask for! 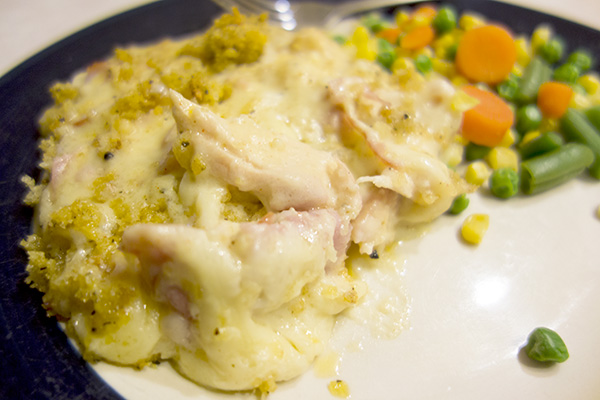 Place shredded chicken breasts on the bottom of the baking dish. Take the slices of ham and chop it up and scatter it over the chicken. Lay the cheese slices over the top of the ham.

Melt the butter in a large saucepan and stir in the flour to form a roux. Pour in the cold milk and continually stir to make a smooth sauce. Cook until sauce thickens and then stir in lemon juice, mustard, salt, salt and pepper. Pour sauce over the chicken/ham/cheese mixture, making sure to evenly distribute.

Pour breadcrumbs into a ziploc bag. Melt the butter and then pour into the bag. Close the bag and mix the butter and crumbs together. Sprinkle the mixture over the top of the casserole.

Bake the casserole uncovered for 45 minutes.

This week’s Recipe | Crockpot Steak and Gravy by DeDe Smith
I loved this comfort food! It comes together SO fast as you just add the few ingredients to the crockpot and let it cook all day. It was so good! My kids liked it the first night, but they didn’t think it worked good for leftovers – but I disagree. We had it for several nights and it was still yummy to me! We served it over rice and I loved the texture, but it would be good with pasta or potatoes as well! Serve with a side of steamed veggies!
The ultimate comfort food of flavorful meat and made in your slow cooker!

The ultimate comfort food of flavorful meat and made in your slow cooker!

Spray slow cooker with non-stick cooking spray and place steak in the bottom of the pot. Sprinkle with seasonings. In a large bowl, mix together water and gravy mixes and then pour over the steak. Cook all day (8-10 hours) on low. The meat will be very tender and you can just shred it. Serve over rice, pasta, or mashed potatoes.

This week’s Recipe | Chicken Pillows by DeDe Smith
This is a hit at our house – a creamy, comforty dish that warms you right up and makes you eat way too much!
Creamy comfort for your tummy!

Creamy comfort for your tummy!

In a saucepan, mix cream, cheese, cream of chicken soup. Heat just until the cheese melts (do not boil).

In a bowl, mix the soft cream cheese with butter until very smooth, then add in garlic powder and onion.

Add in the chopped chicken and cheese. Mix well until combined. Season with salt or black pepper to taste.

Unroll the crescent rolls.Place 1 heaping tablespoon chicken mixture (or a little more) on top of each crescent triangle, then roll up starting at the thicker end.

Drizzle a small amount of soup mixture on the bottom of the dish.

Then place the crescent rolls seam-side down on top of the creamed mixture in the casserole.

Drizzle the remaining sauce on top and sprinkle with grated cheese.

We headed into Ogden and spent the afternoon at the Toad’s Fun Zone, playing arcade games, laser tag, and miniature golf! The kids really enjoyed it!

We headed home this morning. We all felt a little sad leaving our “vacation home” and getting back to reality. We spent the day just hanging out at home, unpacking and getting ready for the week.

The kids went back to school today. Joey took the kids to Beth’s soccer game, while I headed to the Back to School Night. I was shocked at all of the papers that I got! Beth’s schooling is so different than JJ’s and we will have a lot to do with homework, etc. So I made a calendar and started planning the month with all that is going on and planning groceries/menu.

My computer started acting up today. I know the fan is going, so I took it into Simply Mac. I spent the day playing on Joey’s computer and catching up on my Facebook games. 🙂

Comfort food is always good and we made a quick dinner tonight with Rice-a-roni, Stovetop stuffing, and broccoli! I got my computer back today – basically, the fan problem stopped so I’m going to have to wait until it completely dies and just try to make it last. 🙁

Another Soccer game today! It was so hot, but Beth made her first goal and it was really fun to see her so excited about it!

The NFL Football season has begun! Unfortunately our Colts lost today, so we were pretty sad.

I love it when my kids are silly and happy at the same time! Today I was working on my computer in the bedroom and I could hear laughter coming from the living room. A second later the kids came bursting in – they had found 2 pairs of Joey’s racquetball glasses and they thought it was hilarious to put them on. I quickly grabbed the camera and took a photo – my kids are too cute!

I heard this quote on twitter today and just loved it. My kids love hearing stories and watching movies and just using their imagination. I love hearing them imagine and play together and I really do think that fairy tales help them to learn about life and how to truly LIVE in it. Thank goodness for good stories!

I’m on a GILMORE GIRLS kick again. This show holds a lot of sentimental value to me. It started after Joey and I had been married for a few months and it was the first show we watched together. We watched every episode together until the show ended and it just became a part of us – our family. Everytime I rewatch it – its like I’m reliving my life and also like I’m a part of Stars Hollow. I seriously want to live in that town! 🙂 Anyways, so I am rewatching it as I am designing and it is always a nice thing. In fact, it makes me want to have another baby girl so I can name her Rory. 🙂

Showers have become the norm around here, but the kids still enjoy an occasional bathtime! Actually the kids always love it – its me that makes them take a shower because its faster. I really am trying to slow down my life because a bath really is a nice thing to do every once in awhile!

I love watching Joey play with the kids. He’s so much better at it than I am. I’m always feeling the stress of my to-do lists and I don’t take the time to get on the floor and play, but Joey does it. It’s not uncommon to find him even playing ponies or dolls with Beth. He’s such a good daddy.

Our day started very early. We are not morning people, but we were able to book a early morning family photo shoot with a photographer in my church. I have been following her blog for awhile and finally got talking to her and was able to do a trade with her – I designed her some design stuff and she did a photo shoot for me. We left the house at 7:30am and went to a fun railroad location and spent about an hour getting fun shots of our family, Joey and I as a couple, and individual shots of the kids. I really can’t wait to see how they turned out! Thank you Maria!

We went to Salt Lake City for church today. We were able to go and be with Brandon and Sabrina as they blessed Kalissa. Afterwards we were able to join friends/family at their house and visit for awhile. We even watched the end of the Colts game at their house (they barely won – but we’ll take it). Then we went home and relaxed for the rest of the day. It was one of those days where we needed comfort food – so for dinner I made some homemade noodles with vegetables and served it over mashed potatoes. SO GOOD!

I'm a wife, a mom, a blogger, a lover of crafting, and a graphic designer. I believe in living life to the fullest, sharing your heart and talents to enrich the lives of others, and then telling your story to leave as a legacy for those that come after you.

This week’s recipe  |  CHICKEY PASTA A delicious pasta dish that is light and yummy! The chicken pieces are heaven – in fact, you could just make the chicken and use as homemade chicken nuggets! Chickey Pasta Save Recipe Print Recipe My Recipes My Lists My Calendar Ingredients2 lb boneless skinless chicken breast, cut into END_OF_DOCUMENT_TOKEN_TO_BE_REPLACED

I am DeDe Smith of DesignZ by DeDe and I’m the proud creator of the TearZ, ScatterZ, and many more collections! I am a Digital Scrapbook Designer. I specialize on creating digital kits that help customers scrapbook the special moments in their lives. I hope that you can use my products to share your story END_OF_DOCUMENT_TOKEN_TO_BE_REPLACED

I am so thankful that I started writing some of my memories down about this trip on the blog, because I think there is a lot I could have missed! I’m so thankful to not forget these stories! I didn’t write everything down, so from now on this album might not be as detailed, but END_OF_DOCUMENT_TOKEN_TO_BE_REPLACED